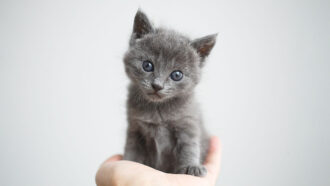 cloud: A plume of molecules or particles, such as water droplets, that move under the action of an outside force, such as wind, radiation or water currents. (in atmospheric science) A mass of airborne water droplets and ice crystals that travel as a plume, usually high in Earth’s atmosphere. Its movement is driven by winds. (in computing) A network of computers (hardware), known as servers, which are connected to the internet. They can be used to store data and computer programs (software) that can be accessed by one or many people at once, and from anywhere in the world.

force: Some outside influence that can change the motion of a body, hold bodies close to one another, or produce motion or stress in a stationary body.

mass: A number that shows how much an object resists speeding up and slowing down — basically a measure of how much matter that object is made from.

matter: Something that occupies space and has mass. Anything on Earth with matter will have a property described as “weight.”

orbit: The curved path of a celestial object or spacecraft around a galaxy, star, planet or moon. One complete circuit around a celestial body.

physical: (adj.) A term for things that exist in the real world, as opposed to in memories or the imagination. It can also refer to properties of materials that are due to their size and non-chemical interactions (such as when one block slams with force into another).

star: The basic building block from which galaxies are made. Stars develop when gravity compacts clouds of gas. When they become hot enough, stars will emit light and sometimes other forms of electromagnetic radiation. The sun is our closest star.

sun: The star at the center of Earth’s solar system. It is about 27,000 light-years from the center of the Milky Way galaxy. Also a term for any sunlike star.