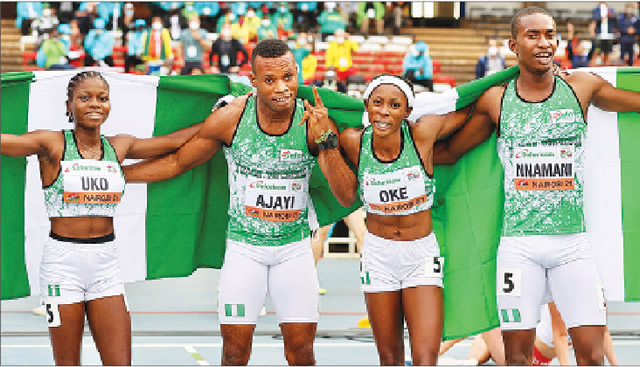 Nigeria had a great first day to remember at the World Athletics U-20 Championships on Wednesday as the 4x400m mixed relay team won the gold medal.

Nigeria thus won its first World U-20 gold since 2008 when Folashade Abugan won the women’s 400m title in Bydgoszcz, Poland.

Uko ran a blistering second leg, powering to the first position after collecting the baton from third-place Nnamani, before handing over to Oke, who ran the third leg.

Ajayi, who ran the anchor, also overcame a late resistance from Poland’s Patryk Grzegorzewicz on the home straight, to win the gold medal for Nigeria.

In other races, Team Nigeria captain Godson Oghenebrume ran the second fastest time of 10.22secs in the men’s 100m semi-final to qualify for Thursday’s final, while Praise Ofoku also qualified for the women’s 100m final in 11.57secs.

Tima Godbless was however not as lucky as she could only place fifth in her semi-final to miss out on a final slot. Her time was the fastest non-qualifier.

Earlier in the day, Uko ran the fastest time of the three heats – 52.33secs – to qualify for the final of the women’s 400m on Saturday.

Chinecherem Nnamdi threw a national U20 record to top the standings in the men’s javelin throw qualification, with the javelin landing at a mark of 78.02m in Group A.

Meanwhile, Minister of Youth and Sports Development, Sunday Dare, has hailed the 4x400m mixed relay team for their gold-winning feat.

Dare said the win should serve as a new start for the Tonobok Okowa-led board of the Athletics Federation of Nigeria.

“I want to specially congratulate our U-20 team for making history in Nairobi. This gold is for all Nigerians and this should serve as the perfect start the new board of the Athletics Federation of Nigeria needs to correct the ills of the immediate past and return Nigeria among the major athletics nations in the world,” Dare said.

“I remember how dominant we were in the early years of the championships, when we dominated the sprints and quarter mile events. I still vividly recall how Tina Iheagwam, Falilat Ogunkoya and Mary Onyali dominated the 100m and 200m events at the inaugural edition of the championships in Athens, Greece in 1986. I also remember we won the women’s 400m in successive editions. Who will forget how Francis Obikwelu became the second sprinter to win the 100m and 200m in 1996 in Sydney, Australia?

“I am calling on the AFN to ensure the athletes discovered here are monitored and given the necessary encouragement to make them follow in the footsteps of their predecessors like Falilat Ogunkoya, Mary Onyali, Ese Brume, Chioma Ajunwa and Blessing Okagbare, who grew to become individual Olympic medallists for Nigeria.”