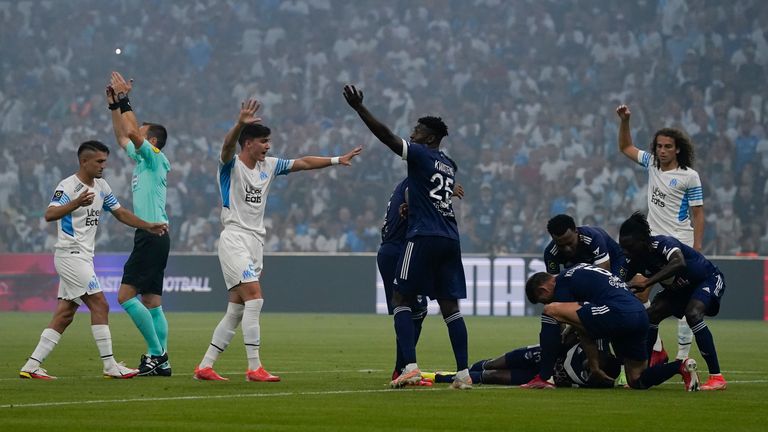 Bordeaux came from two goals down to claim a 2-2 draw at Marseille on the weekend that Lionel Messi was unveiled to the Paris Saint-Germain crowd.

The hosts led at half-time thanks to goals from in-form Dimitri Payet and Cengiz Under before 18-year-old defender Timothee Pembele and Remi Oudin scored for the visitors.

The visitors’ Yacine Adli was named on Vladimir Petkovic’s bench due to the 21-year-old attacking midfielder’s expected move to AC Milan.

There was a worrying sight after six minutes as Bordeaux’s Samuel Kalu collapsed outside the home penalty box without any contact with an opposition player.

Less than 90 seconds later Nigeria winger Kalu was back on his feet after treatment, he played on for five minutes before being substituted by Remi Oudin.

Under claimed his second goal in as many games after the half hour mark after Brazilian midfielder Gerson’s cut-back.

Payet added his third of the campaign four minutes before the interval with a sublime effort which started near the half-way line and finished with his low shot into bottom corner.

Petkovic’s men were on level terms by the hour mark after Timothee Pembele, who joined on-loan from Paris Saint-German last week, and first-half replacement Oudin scored to claim the point before Leo Balerdi was sent off after 89 minutes for the hosts.

Khazri’s effort was Ligue 1’s quickest goal since Valentin Vada after 14 seconds for Bordeaux against Toulouse in January 2017.

Seven-time champions Lyon are still without a win this season after losing 3-0 at Angers and had forward Maxwell Cornet sent off for two fouls in the second half.

Promoted Clermont made it back-to-back victories to start their first top-tier campaign as Guinea forward Mohamed Bayo scored twice in the 2-0 home win over Ligue 2 champions Troyes, who are under the Manchester City umbrella of the City Football Group.

On Saturday, Messi received a rapturous reception as he ran out onto the pitch along with PSG’s other summer signings, with a 48,000-full house greeting the six-time Ballon d’Or winner despite the welcome ceremony taking place an hour before kick-off.

The Argentina attacker watched the 4-2 win over Strasbourg from the stands alongside Neymar and Angel di Maria — the trio not yet considered match-fit having enjoyed an extended break after playing at the Copa America.

Elsewhere, Christophe Galtier had a successful return to Lille, with whom he lifted the title last season, as his Nice side hammered the champions 4-0.