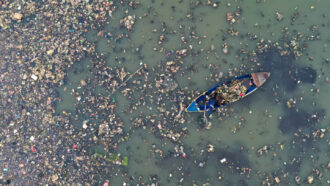 appetite: A desire to eat or drink, often because of hunger.

biodegrade: (adj. biodegradable) To break down, based on the activity of microbes, into simpler materials. This usually occurs in the presence of water, sunlight or other conditions that help nurture those organisms.

chemical: A substance formed from two or more atoms that unite (bond) in a fixed proportion and structure. For example, water is a chemical made when two hydrogen atoms bond to one oxygen atom. Its chemical formula is H2O. Chemical also can be an adjective to describe properties of materials that are the result of various reactions between different compounds.

coral: Marine animals that often produce a hard and stony exoskeleton and tend to live on reefs (the exoskeletons of dead ancestor corals).

current: A fluid — such as of water or air — that moves in a recognizable direction.

debris: Scattered fragments, typically of trash or of something that has been destroyed. Space debris, for instance, includes the wreckage of defunct satellites and spacecraft.

decay: The process (also called “rotting”) by which a dead plant or animal gradually breaks down as it is consumed by bacteria and other microbes.

ecosystem: A group of interacting living organisms — including microorganisms, plants and animals — and their physical environment within a particular climate. Examples include tropical reefs, rainforests, alpine meadows and polar tundra. The term can also be applied to elements that make up some an artificial environment, such as a company, classroom or the internet.

environment: The sum of all of the things that exist around some organism or the process and the condition those things create. Environment may refer to the weather and ecosystem in which some animal lives, or, perhaps, the temperature and humidity (or even the placement of things in the vicinity of an item of interest).

expedition: A journey (usually relatively long or over a great distance) that a group of people take for some defined purpose, such as to map a region’s plant life or to study the local microclimate.

Hawaii: This central Pacific island chain became the 50th U.S. state on Aug. 21, 1959. The entire crescent-shaped island chain spans some 2,400 kilometers (1,500 miles). Each of the islands was created from one or more volcanoes that long ago sprang up from the ocean floor. The chain sits some 3,857 kilometers (2,397 miles) west of San Francisco, Calif., and 8,516 kilometers east of Manila, the Philippines.

litter: Material that lies around in the open, having been discarded or left to fall where it may. (in biology) Decaying leaves and other plant matter on the surface of a forest floor. (in zoology) A group of young animals born at the same time to the same mother.

mealworm: A wormlike larval form of darkling beetles. These insects are found throughout the world. The ever-hungry wormlike stage of this insect helps break down — decompose, or recycle — nutrients back into an ecosystem. These larvae also are commonly used as a food for pets and some lab animals, including chickens and fish.

microbe: Short for microorganism. A living thing that is too small to see with the unaided eye, including bacteria, some fungi and many other organisms such as amoebas. Most consist of a single cell.

microplastic: A small piece of plastic, 5 millimeters (0.2 inch) or smaller in size. Microplastics may have been produced at that small size, or their size may be the result of the breakdown of water bottles, plastic bags or other things that started out larger.

nanotechnology: Science, technology and engineering that deals with things and phenomena at the scale of a few billionths of a meter or less.

Pacific: The largest of the world’s five oceans. It separates Asia and Australia to the west from North and South America to the east.

plastic: Any of a series of materials that are easily deformable; or synthetic materials that have been made from polymers (long strings of some building-block molecule) that tend to be lightweight, inexpensive and resistant to degradation.

pollutant: A substance that taints something — such as the air, water, our bodies or products. Some pollutants are chemicals, such as pesticides. Others may be radiation, including excess heat or light. Even weeds and other invasive species can be considered a type of biological pollution.

scourge: A person or other organism that inflicts pain or threatens the success and wellbeing of others nearby.

sea: An ocean (or region that is part of an ocean). Unlike lakes and streams, seawater — or ocean water — is salty.

Texas: The second largest state in the United States, located along the southern border with Mexico. It is about 1,270 kilometers (790 miles) long and covers an area of 696,000 square kilometers (268,581 square miles).