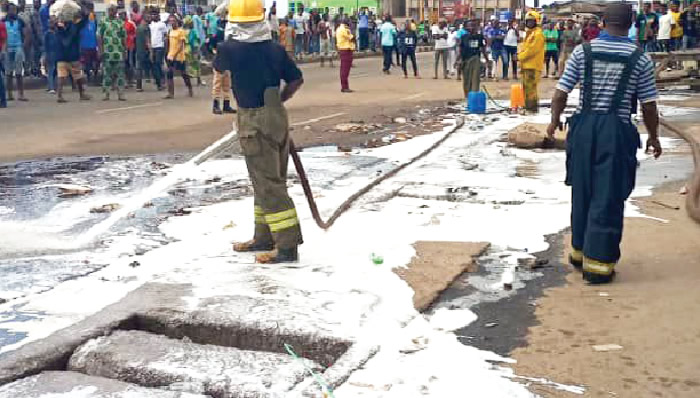 Several residents of Omoboriowo Street at Pipeline bus stop, Igando-Ikotun Road, Lagos and its environs were temporarily displaced on Friday after suspected pipeline vandalism in the area went awry.

Petrol gushed out from the vandalised pipeline of Atlas Cove-Mosimi System 2B Pipeline channel around 1am, flooding houses and drainage channels, forcing dwellers to flee their homes at night.

Many commuters were stranded and had to resort to trekking as vehicular movement was restricted along the corridor to avoid possible fire outbreak while residents ran to safety amid fears of an imminent explosion.

“All of us ran to Bolorunpelu (a neighbouring bus stop),” a woman, Beatrice Akinwumi, said of how she and her family members escaped. “Some people have fled to Mushin. Fuel was gushing into our compounds. It flooded all the premises. We all ran out at night.”

Another resident, who identified himself as Rafiu, said the smell of the fuel was so pungent that it almost choked his children.

He lamented that pipeline vandalism had become a recurring incident in the Igando area, urging the government to be proactive to avert tragedies.

He stated, “Everybody ran out of their room in the night. The smell of the fuel almost choked up my children. We couldn’t talk. I trekked from here to Iyana Ejigbo before I couldn’t perceive the smell again. It was God who saved us.

“It (pipeline vandalism) has been happening constantly in this community since last year. There was a time the vandals abandoned their tankers and pumping machine at a spot and ran away. One happened just last month.”

Commercial activities were also paralysed for several hours as fuel flowed into many parts of Ikotun Market.

“There is a lot of fuel inside the market. Nobody could open their shop. It has reduced a bit now (at 10am). It was really much at night. We have been in fear since 1am. We are not safe,” a trader, Afusat Babajide, said.

LASEMA General Manager, Dr Olufemi Oke-Osanyintolu, in a situation report, said a preliminary investigation by the agency showed that the spillage was caused by suspected pipeline vandalism and illegal bunkering.

He stated that emergency responders warned the entire community to avoid any open flame in order to avert any explosion.

He said, “Upon arrival at the scene, it was observed that a very large volume of PMS was gushing out of the NNPC pipeline at the aforementioned location. It was flowing heavily in the drainage channels connecting Omoboriowo Street, Old Garage Ikotun Junction, New Garage Ikotun Junction, Ikotun Market, Igando/Ikotun LCDA and Synagogue Church.”

The leakage on the pipeline was fixed around 11am by officials of the NNPC Maintenance while the affected area was dampened to suppress the fuel.

Director, Lagos State Fire and Rescue Service, Mrs Adeseye Margaret, said the agency mobilised firefighters from Abesesan Fire Station to the scene after receiving a distress call at 2.24am.

“On getting there, it was discovered that PMS was gushing out from the pipeline and contents had travelled through drainage and available means to Igando/Idimu Road and environs of Alimosho, Lagos,” she added.

Acting Zonal Coordinator, South-West Zonal Office of NEMA, Ibrahim Farinloye, said the agency appealed to traders not to open the market for operations on Friday.

He added, “Repairs of the vandalised pipeline had been completed but the content had spread far to other areas through drainage channels. We are appealing to residents of the affected areas to desist from using any flammable light of whatever nature to prevent explosion. The spilled content in the drainage channels was traced up to Ikotun.”