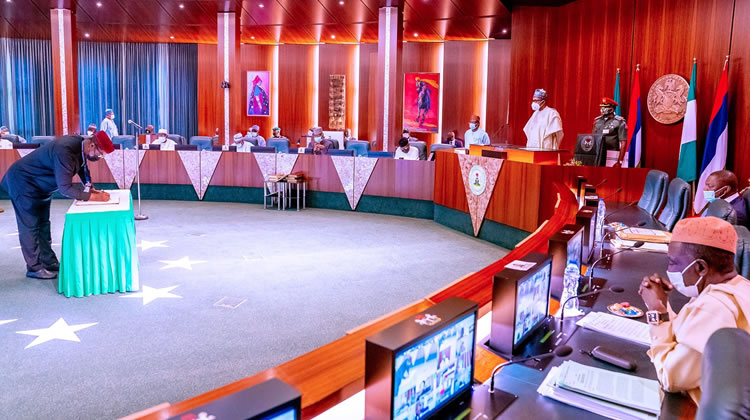 He made the disclosure during a visit to Gov. Atiku Bagudu of Kebbi State, at Government House, Birnin Kebbi, the state capital.

The News Agency of Nigeria reports that the minister, an engineer by profession, was in Kebbi to ascertain the level of work executed by the state government on the construction of some federal roads in the state.

“Out of the total distance of roads we have across the country, 34,000kms plus are under the jurisdiction of the federal government out of which we are currently working on over 13,000kms simultaneously with over 800 contracts currently ongoing.

“Before now, some states may find it extremely necessary, because of urgency, to approach the federal government to seek permission to construct federal roads that are within their states.

“The federal government will give them the permission and they will be reimbursed later. Before 2016 or around that period, the Federal Executive Council (FEC) set up a committee to verify and clear road construction executed by some state governments.

“The committee headed by the Minister of Works and Housing, Hon. Babatunde Raji Fashola was able to clear and verify 25 states who built federal government roads in their states.”

He recalled that President Muhammadu Buhari had given approval for the payment of N477 billion, which was shared among the 25 states respectively, adding that “this is the third set of which Kebbi is among, alongside Yobe and Taraba States.”

“That’s why I am here together with my team today, the secretariat is domiciled in the SGF’s office and that’s why you see me with the Permanent Secretary, Cabinet Office, to come and verify the two roads as you requested.”

Responding, Gov. Bagudu appreciated the minister for the visit, applauding the present administration for completing one of the legacy roads it inherited; Sokoto-Tambuwal-Kontagora road.

“This road is one of the most important roads, not only does it link other states with the Federal Capital Territory, but it is the main gateway to Lagos.

“I remember in 2015 when we came in before the completion of the road, whenever we were having security council meeting, it was a nightmare for the Emir of Yauri to come, but today, he even looks forward to coming for the meetings.

“This is one of the numerous uncompleted roads that were inherited by the President Buhari administration which are either completed or on the way to completion. This is highly commendable.

“Though, the President wouldn’t have achieved that without a formidable team, for that we also commend the efforts of the ministry.”

Bagudu observed that apart from the completion of inherited projects, the present administration had been able to initiate and execute new gigantic projects across the country.

Earlier, the Commissioner for Works in the state, Alhaji Abubakar Chika-Ladan told the governor that he led the visitors on inspection of Dabai-Mahuta-Koko road which was constructed in 2006 at the cost of N4.8 billion as well as Malando-Garin Baka-Ngaski 45 km road which gulped N2.2 billion in 2007. (NAN)